Russians do not hide their intentions anymore. Recently, the Russian state information agency de-facto called on the genocide of Ukrainians. Now, a Russian state journalist revealed that the destruction of Mariupol is the attempt to demonstrate Ukrainians what fate awaits the towns that will not surrender to the Russian military.

Meet Alexandr Sladkov. He is a notable figure in the Russian military journalism, a special correspondent of the state TV channel "Vesti".

He owns a Telegram channel with more than 340 thousand subscribers. Currently, he is in Mariupol, providing the news coverage for all Russian audiences.

THE DISTRICT OF APOCALYPSE

SHOULD WE SHOW THIS DESTRUCTION TO THE WHOLE WORLD?

Firstly, because it is the truth.

Secondly, it wasn"t us who invented it, and people will understand it tomorrow, if not today.

Thirdly, let them see in Kyiv and Lviv, Cherkasy and Poltava, Ternopil and Chernivtsi — if the city doesn"t surrender, then it is destroyed.

However, it will be harder to rebuild afterwards. Mariupol will be rebuilt by Russia. What about the cities of Central and Western Ukraine? They will be destroyed if they try to resist Russian forces.

The withdrawal from Kyiv does not mean that the Special Military Operation will be stopped. The Nazis of the Ukrainian Armed Forces will be defeated near Donetsk. And Kyiv… Well, we come when we want to come, and we leave when we want to leave.

And we will return when we want to do so. 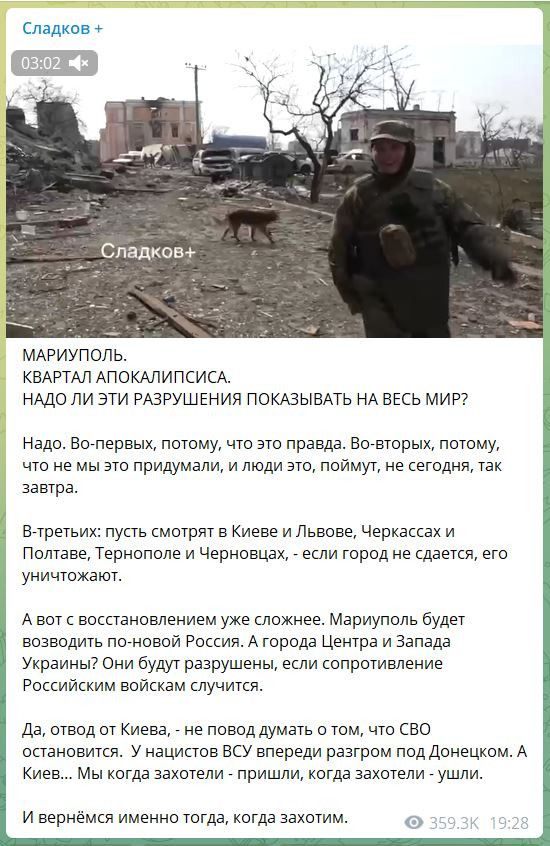