Some Jonah Fisher wrote an article "Zelensky v oligarchs: Ukraine president targets super-rich" in no less than BBC a few days ago. 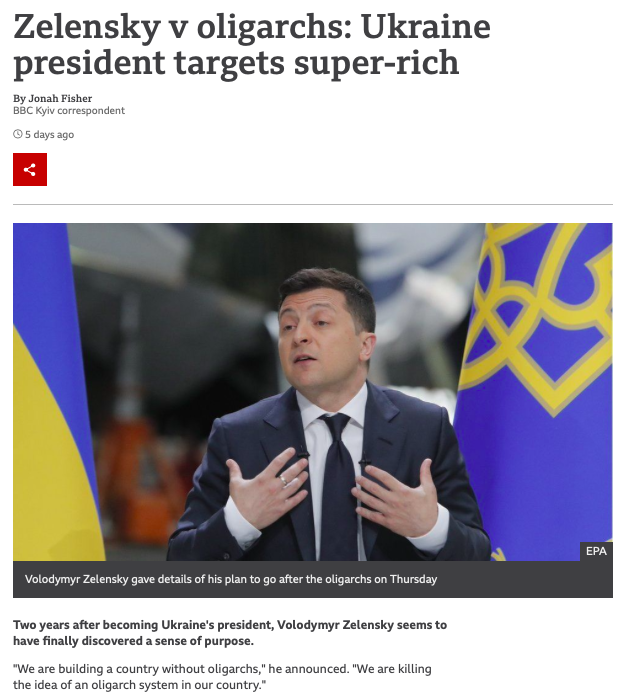 Even if you skimmed an article, or used the CTRL+F to find the name of the country"s biggest oligarch Akhmetov, you would fail to find his mentioning in this otherwise extensive piece.

Writing an article about oligarchs in Ukraine and not mentioning Akhmetov is a skill no one is born with – it"s an acquired skill. It comes with wisdom, hunger, ambition. It comes with understanding, that some people pay for writing letters. Some people pay even more for omitting to write some letter combinations.

To write an article about oligarchs in Ukraine and not to mention Akhmetov is like writing an article about top Netflix series on chess about female players and never once mentioning "The Queens Gambit".

To write an article about oligarchs in Ukraine and not to mention Akhmetov is like writing an article about "best desserts of the world with mascarpone and savoyardi" and never mentioning Tiramisu.

To write an article about oligarchs in Ukraine and not to mention Akhmetov is like writing an article about the "best ever lesbian comedians with top TV shows in the world who are married to Portia" and never once mentioning Ellen De Generes.

You get the gist.

We call it jeansa in Ukraine. A paid for article, that is aimed to mold public opinion. Everyone does jeansa in Ukrainian journalism. There are only a few journalists who are only guided by their own opinion and worldview, like Vitaliy Portnikov, Yulia Mostovaya. But they are literally an exception to the rule.

Seeing jeansa of the BBC caliber is still rather unique.

I will leave it to you to check out the choice of hero picture to the article, where Zelensky looks both: clueless, helpless and responsibility-dodging at the same time.

I will leave it up to you to interpret "Mr Kolomoisky is perhaps Ukraine"s best-known oligarch" – and decide just how much of it is manipulation, how much is an attempt to form public opinion on the topic.

I will leave it up to you to decide why the author places Poroshenko – a confectionary mogul – as the 3rd in line of oligarchs. While the mere term oligarch suggests, apart from riches, political and media influence, 3 main characteristics:

Akhmetov has everything to lose and nothing to gain from anti-oligarch law. So he will fight. So we will see more of the articles about oligarchs in Ukraine with his name timidly omitted from the list of usual – and not-so-usual suspects.

As for the law itself, it signals a few things:

Zelensky will run the second term, despite his promise to be a one-terms-fix-it-all-saviour of the country.

Zelensky has gone into a stage on the Dunning-Kruger cluelessness curve, whereby he genuinely believes, he is a seasoned politician, who is capable to survive another term.

Zelensky is a weak predictable player, who chooses to win by literally eliminating his major political opponent, making up laws as he goes, while he still has some residual power in Parliament.

Zelensky is at odds with Akhmetov and has no clue about the possible repercussions.

Zelensky aspires to instill Putin-like control of all branches of power in the country and he only has 2 enemies along the path – [note to self: none of them is called Putin]: Poroshenko and oligarchs. So he decides to kill 2 birds with one stone.

What does the future hold for us?

Will Zelensky actually manage to become Putin, remove oligarchs and create his own network of influence across all branches, inclusive media, military and security forces?

He sure wants to achieve this with the help of digital means, thus all the digitalization efforts, whereby every citizen must have a govt app on their phone.

There are 2 reasons why Zelensky will fail to become a Ukrainian Putin:

Lena Zelesnkaya – a smart woman with great intuition, who knows that some scripts are best kept short and sweet, or else the finale may turn out never-ending and too sour with plenty of bitter notes.

People of Ukraine, who tend to quickly fall in love with the idea of bright future tomorrow, but whose politically active part are quick to take to the streets and turn down dictators or wanna-be-dictators. Interestingly, that this active part of Ukrainian society hardly ever takes part in the surveys, our president relies so much on.